A selection of rare Goliathus beetles for collectors

Goliath beetles of the genus Goliathus are very much sought-after by entomologists for their large size, beauty and interesting forms. They live in Central African countries and can be found on flowers in the canopy. Most of the species are rather easy to find except Goliathus atlas hybrid and Goliathus cacicus. Collectors do not collect many of the wild Goliathus as they focus on rare forms and on record-size Goliathus, which are very few. The collecting of wild Goliathus helps locals make a living without destroying the forest, it is encouraged along with eco-tourism as a sustainable way to protect the virgin forests in central Africa.

Goliathus cacicus was rather common in the 1980s but has become very rare on the market due to the impressive deforestation in Ivory Coast for the production of cacao (same phenomenon as palm oil in Indonesia). 95% of Ivorian forests have disappeared, totally destroyed by the big chocolate companies we all know. Goliathus cacicus has no more habitat and some entomologists think it is an extinct species. Most specialists think though that Goliathus cacicus is still alive in some protected National Parks, but these parks are no-collecting area. On this page, you will find several large Goliathus cacicus from the 1980s/1990s for sale. 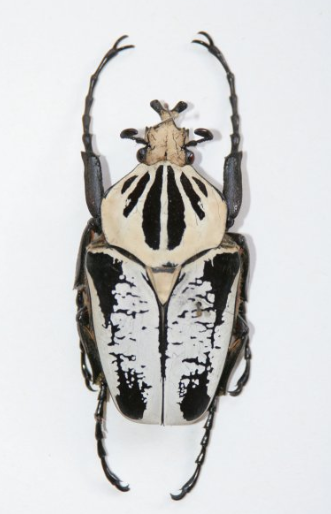 an example of a rare Goliathus atlas